This Spanish thriller is the story of mysterious Bea who meets the likable Quim by chance in a gas station. Both end up stranded in a remote forest and rely on each other for survival when they are targeted by an unknown sniper.

This 2002 Spanish film is the story of 6 shipyard workers in an industrial town in northern Spain after they've lost their jobs. Each man deals with his new reality differently, some trying to reinvent themselves while others just try to get by. Santos (Javier Bardem) proves to be a bit of an agitator while also dreaming of the perfect life he could have in Australia.

While certainly a great idea and good cast, to me the film was slow and slightly monotonous.

The dialogue in the film is quintessentially Spanish, and in addition to some of the fun Spainisms like coño, joder, y hostia, there were some fun new words for me: like astillero (shipyard) and gilipollas (jerk, idiot).

This hilarious Spanish film is the story of Rafael, a womanizing super-salesman for a Spanish department store. When a floor manager position comes up, Rafael seems the most likely candidate. He is beaten on a technicality by long-term rival Don Antonio, who mysteriously disappears and Rafael becomes the main suspect.

This quirky Spanish film centers around a tapas bar in a tranquilo suburb of Barcelona. Although the storyline is not full of action, you do get to meet some great characters who form unlikely relationships, like the bully tapas bar owner who hires a Chinese immigrant with a passion for cooking and a perfect command of Spanish or the young grocery store worker Cesar who falls for the owner of the neighborhood deli who is twice his age.

The film is also about secrets in love and life and coming to terms with them, like the drug-dealing grandma grappling with her husband's cancer diagnosis or the tapas bar owner understanding why his wife may have left him.

I imagine anyone who has spent time living in Spain would love this film for pointing out the subtle idiosyncrasies of Spanish culture.

Several years back I purchased this book before heading to Andalucia, one of my favorite regions of Spain. The memoir is clever, and really captures the feeling of Andalucia, with its dry hilly terrain, lemon and olive trees, and tranquilo people. 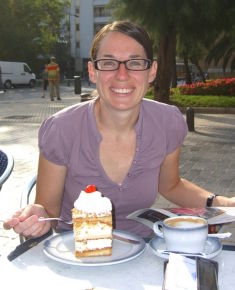 From Barcelona, music group Jarabe de Palo is a great, upbeat Spanish rock band. The world jarabe in Spanish means syrup (in a medicinal sense) while palo means stick. As the saying goes, a naughty child needs a "jarabe de palo" to start acting right. The main indication the band is Spanish is in the singer's accent, Pau Donés, where "z" and "c" sound like "th" in English (corazón, or heart, sounds like corathón).

Ask any American about Spanish actress Penélope Cruz and they'll say: "she's beautiful". But is she a good actress? Hollywood films like Blow don't do a very good job of showcasing Cruz's talents as an actress; instead, they focus on her beauty and 'exoticness'. Enter Pedro Almodóvar, one of the most well-known Spanish directors, who also happens to know how talented Cruz is. Working together for the first time since Todo sobre mi madre, Volver is a fantastic film and Cruz is a worthy main character.

This night view photo was taken near our hotel.

Next time you're heading to Spain, pack In the Garlic next to your guidebook (or you can pick it up when you get there). I wished I had read the book at the beginning of my trip, as it would have explained so much of my confusion about Spanish culture, for example:

When I walk by people on the street in a small town and I say "hola", why are they saying "adios"?
We say hello, and they say goodbye. We're used to this now, but it remained weird for a long time. When walking down the street it's only natural to greet someone you know with "Hola". The Spanish, however, get right to the point and dispatch you with an "Adios".